Modular synthesis involves a lot of on-the-fly experimentation with the hardware, but if you're going to make music in a preplanned way, there's a good chance you will end up involving a computer and connecting it to your modular via MIDI. Here are notes on some of the software I like to use for that and related tasks. I'm focusing on stuff that will run under Linux, but many of these packages are cross-platform. READ MORE 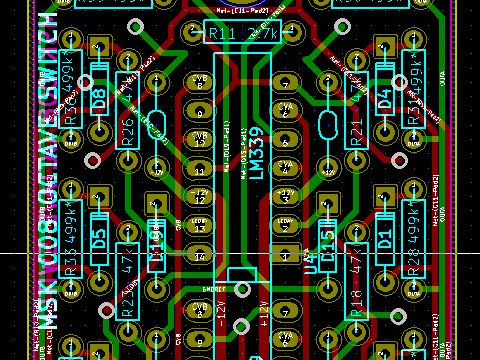 The MSK 008 Octave Switch is planned to launch tomorrow and I've already posted the manual; so I thought it would be fun for this week's Web log entry to introduce some of the software tools I use for producing, and especially for documenting, module designs. My designs are free, my roots are in the free software community and my values emphasize all aspects of free speech, and so I try to stick to free software in running my operation. The title says EDA software ("Electronic Design Automation") but in fact this list covers some other engineering functions too, that people don't usually think of as EDA. READ MORE